STD Cases Up in San Diego

San Diego, California - Cases and rates of syphilis, gonorrhea and chlamydia in San Diego County continued to rise for the third consecutive year in 2017 and were at the highest level in the last two decades, new data from the County Health and Human Services Agency reveals.

Chlamydia cases also increased by 10 percent—from 18,904 cases in 2016 to 20,801 cases in 2017. The overall rate of chlamydia was 628.5 cases per 100,000 people, a 9.3 percent increase from 2016. Chlamydia continues to be the most common reportable STD at the local, state and national levels. The rate of chlamydia among women was 1.6 times the rate among men, and the highest rates were reported among women between 20 and 24 years of age.

“The number of STDs increased in the state and the nation last year, and San Diego was no exception,” said Wilma Wooten, M.D., M.P.H., County public health officer. “Sexually active people should take precautionary measures to avoid getting infected and get tested on a regular basis since many STDs don’t show any symptoms and may go unnoticed until complications develop.” 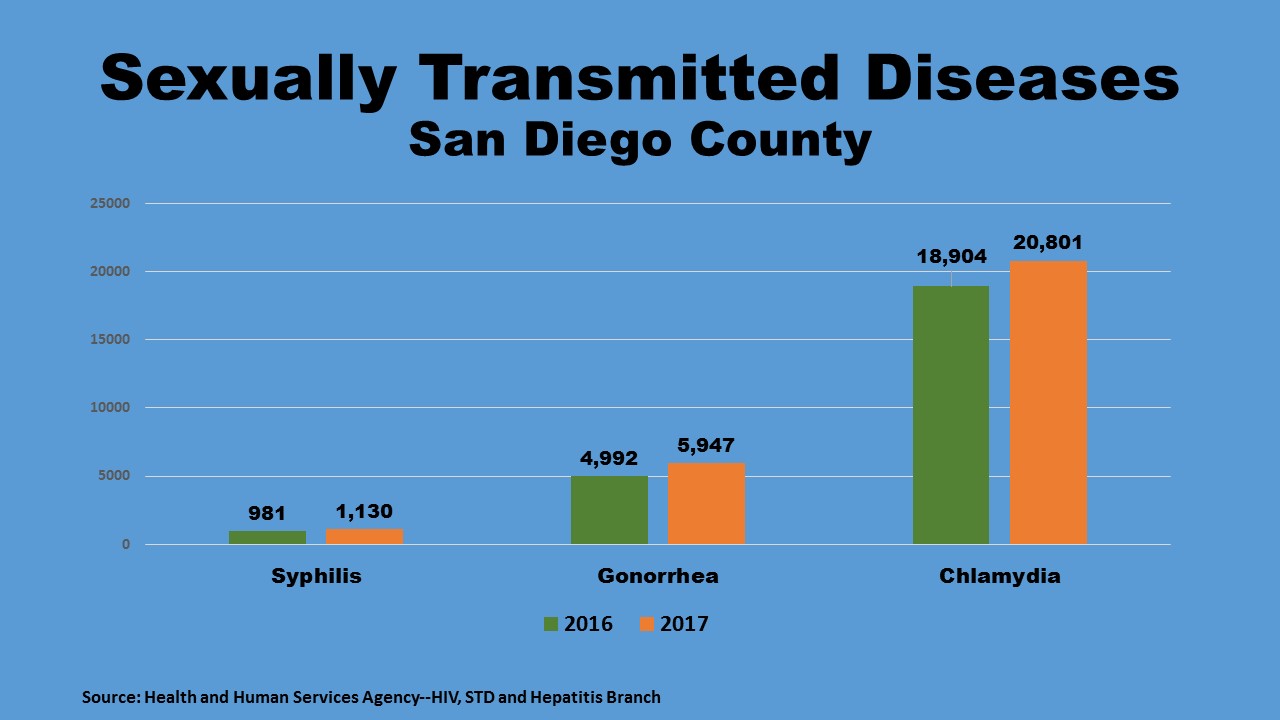 Of particular concern is an alarming increase in the number of cases of congenital syphilis nationwide and in California. Syphilis that is transmitted from an infected mother to her unborn child can result in multiple birth defects and fetal death. Although San Diego County has not seen the increases in congenital syphilis cases observed in other parts of California, and most syphilis cases are reported in men, cases of syphilis in women are being closely monitored by public health officials.

“Congenital syphilis is completely preventable if the mother is diagnosed and appropriately treated for syphilis in a timely manner,” said M. Winston Tilghman, M.D, public health medical officer and STD controller for the County. “All pregnant women should be tested for syphilis during the first prenatal care visit and, if at risk for getting syphilis during pregnancy, would benefit from repeat testing during the third trimester and again at delivery.”

How to prevent STDs

What can you do to lower your risk of contracting a sexually transmitted disease?

Preventing sexually transmitted diseases is part of the County’s Live Well San Diego vision, which aims to improve the health and well-being of local residents.

The County has implemented programs, such as Don’t Think, Know., a free home testing program for gonorrhea and chlamydia available to women 25 years old and younger. The program can be accessed by visiting DontThinkKnow.org or by calling (619) 692-5669 (619-692-KNOW).

The County also operates a program that screens female youths entering San Diego’s juvenile detention facility for these infections and provides treatment to those who have a positive test.

The County also operates four STD clinics, which offer testing and treatment for most STDs regardless of a patient’s ability to pay. For more information about STDs and testing services visit STDSanDiego.org or call (619) 293-4700.