The FBI can only conduct investigations and protect the American people from crime and acts of extremism if it has the support and understanding of the American people. That’s why the special agents-in-charge of each of our 56 field offices work so closely with their communities and community organizations. What happens when these special agents-in-charge get such tremendous support from people in their communities that they want to specially recognize them? They nominate them for a Director’s Community Leadership Award (DCLA). This special award, presented on behalf of the Director of the FBI, was formally created in 1990 to honor individuals and organizations for their efforts in combating crime, terrorism, drugs, and violence in America.

On April 27, 2019, a gunman attacked the Chabad of Poway Synagogue causing several injuries and the death of congregation member, Lori Kaye. The comprehensive federal hate crimes investigation revealed 54 victims. An important component of the FBI’s Civil Rights Program incorporates liaison efforts with other governmental agencies, non-governmental organizations, and potential victim communities to ensure the civil rights of all persons are protected. As such, the FBI’s important relationship with JFS became vital in the days, weeks, months, and year following the shooting.

Immediately following the tragedy, JFS was established as the FBI’s lead point of contact in connecting with the Chabad Community. With full dedication, JFS offered the agency’s commitment to support the FBI’s victim assistance efforts. JFS was integral to the success of the FBI’s response efforts being conducted in the most culturally sensitive and responsive manner. JFS worked closely with the FBI Victim Services Division in order to meet the evolving needs of all victims and deliver important services. For example, JFS was integral in devising the initial crisis support plan for the 54 identified victims as well as the overall support of the Chabad and greater San Diego community. JFS also provided crisis counseling services and led efforts to coordinate an initial Critical Incident Stress Debrief support group. Through these and other services, JFS was an integral community partner to the FBI’s victim assistance response related to the Chabad of Poway Synagogue shooting and the continued support to the greater San Diego community. 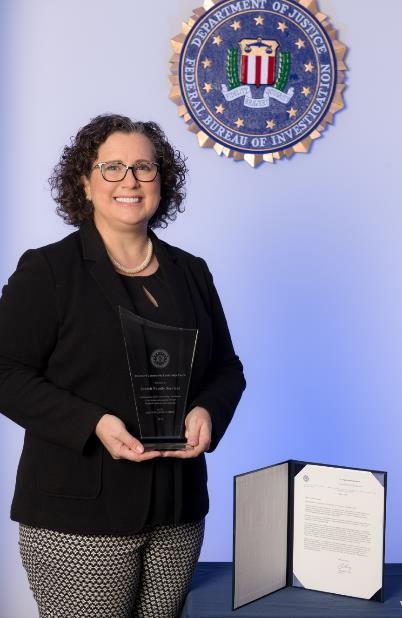 Based on the leadership, dedication, and overall community service to the citizens of San Diego, FBI San Diego honors Jewish Family Service of San Diego as the 12th Annual FBI Director’s Community Leadership Award recipient and extends great appreciation for the significant contributions and service provided to the San Diego community.

Traditionally, DCLA recipients across the nation attend an awards ceremony held in Washington, D.C., where they are recognized and honored by FBI Director Christopher Wray. Due to current COVID-19 related restrictions, this year’s ceremony was canceled, and awards were provided to the recipients by the local Special Agent in Charge.