Loanshark Who Targeted, Threatened Several in the Latino Community Arrested

San Diego, California - A loan shark who primarily preyed on the Latino community, was arrested on suspicion of extortion and making criminal threats in connection with cash loans he made to multiple victims in San Diego County. Hamze Mohamad Karnib, a.k.a. Alex Karnib, 35, demanded repayment well in excess of the amounts borrowed by his victims, then intimidated and threatened borrowers who found themselves unable to meet Karnib’s payment demands.

Karnib was arrested by FBI agents and detectives from the Escondido Police Department on Thursday, December 3, 2020, at his home in San Marcos.

After victims who feared for their safety came forward, officials from the FBI and Escondido Police Department worked with the San Diego County District Attorney’s Office to investigate Karnib’s activities. The DA’s Office is reviewing the case for felony charges and Karnib is currently scheduled to be arraigned in downtown San Diego Superior Court on Monday unless he posts bail and is released from custody.

“The FBI partners with local law enforcement to address criminal extortion and threats of violence in our community,” said FBI Special Agent in Charge Suzanne Turner. “We are asking anyone who has encountered these types of criminal threats or extortion to call the FBI so that we can bring our federal, state, and local law enforcement resources together to combat these terrible crimes.”

“We are extremely appreciative of the cooperation between the FBI and our detectives in seeking justice for members of our community," said Chief Ed Varso of the Escondido Police Department. "Crimes like this, which prey on the vulnerable, are particularly harmful to the victims and we are relieved to have been able to start the process of holding the perpetrator accountable.” 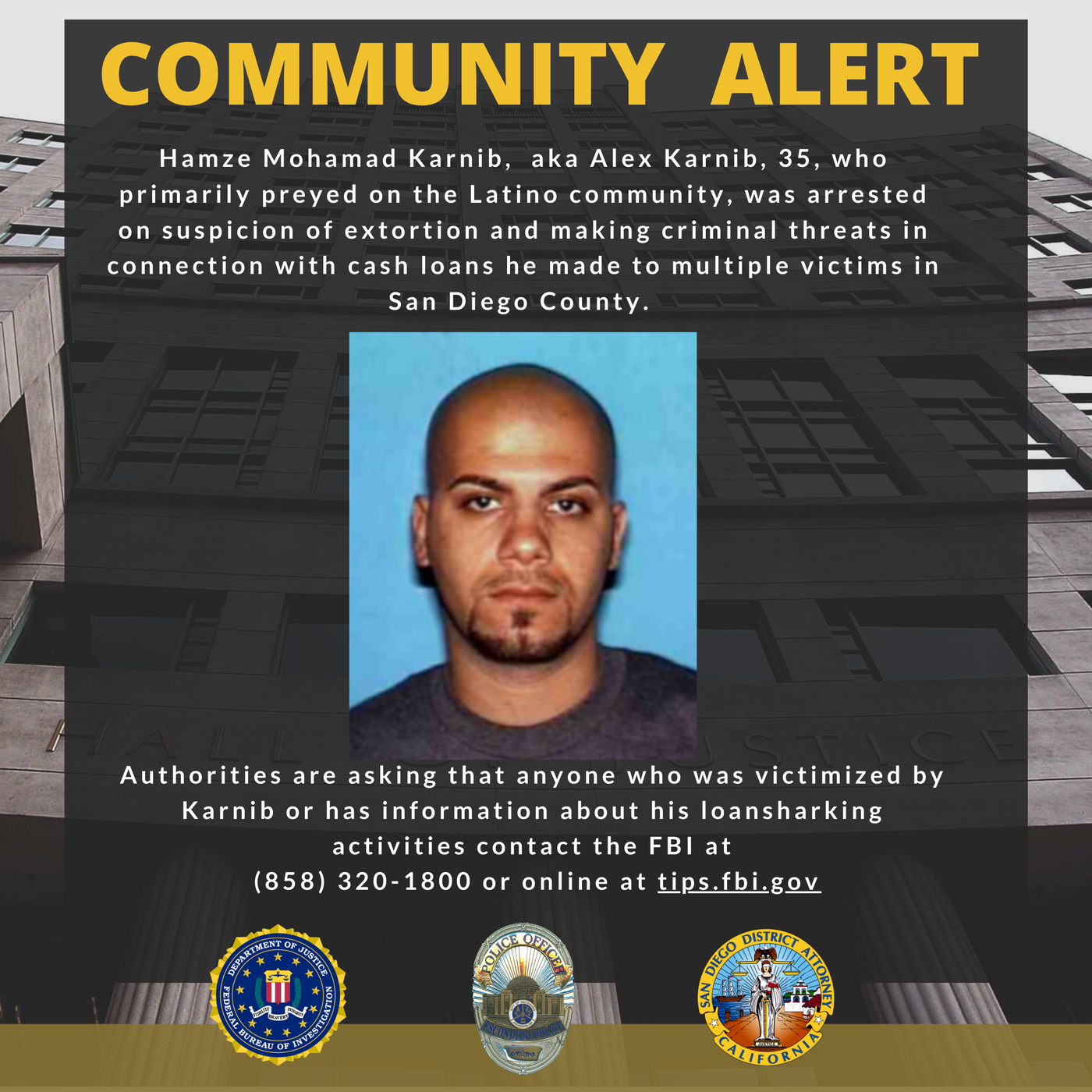 “Threatening and criminal behavior that targets the Latino or any of other members of our community will not be tolerated. Law enforcement in San Diego County comes together to fight against conduct that threatens people’s safety and dignity. Our prosecution team is reviewing the thorough and dedicated investigation by the FBI and Escondido Police Department to determine the appropriate criminal charges that will hold him accountable,” said District Attorney Summer Stephan.

Authorities are asking that anyone who was victimized by Karnib or has information about his loansharking activities contact the FBI at (858) 320-1800 or online at tips.fbi.gov.